The north of England was once the centre of the world’s textile industry and was at the heart of the industrial revolution. Part of that legacy has meant that much of northern England (particularly Yorkshire and Lancashire) is full of our textile heritage.

Being a northern lass I’ve been lucky enough to have visited a lot of these key places; Saltaire – a model village built for workers around Salts Mill (a textile mill for the wool industry) in Shipley just outside Bradford, Quarry Bank – a working cotton mill in Styal Cheshire (just beside Manchester airport) and the gorgeous Piece Hall in Halifax – a beautiful structure of neo-classical colonnaded walkways built around a central huge square to provide a place for handloom weavers to sell the woollen cloth “pieces” they had made. 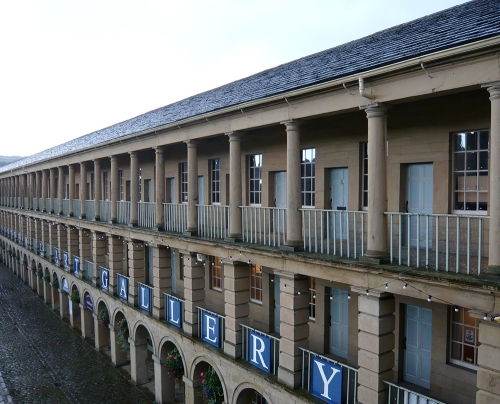 The Piece Hall in Halifax – a stunning piece of neo-classical architecture – if you’re ever in the area, you MUST visit.

Part of this heritage is also to be found in Derbyshire, especially along the Derwent Valley. The stretch of the Derwent Valley which follows the river Derwent and the A6 from Derby, north to Matlock Bath for less than 20 miles, was home to at least 7 separate mills including the still operational Smedley’s Mill at Lea Bridge which was taken over by John Smedley’s family in 1818 and is a name we all recognise today.

The valley is said to have been the birthplace of the factory system and for this reason, in 2001 the area became protected as the Derwent Valley Mills Unesco World Heritage Site.

Matlock Bath itself is a gorgeous little Peak District town enjoyed by walkers and holidaymakers exploring the surrounding hills. I’ve been many times and have often visited nearby Cromford Mill which is gradually being renovated. However, while on holiday in the area last summer I discovered a wonderful working museum at Masson Mills in Matlock Bath. I’ve driven past Masson Mills countless times (often on my way to Cromford) and while I knew of its history as a textile mill, the only information outside the building is a huge “shopping village” sign and so I’d always assumed that had become the modern day fate for Masson Mills. It was only when I found a leaflet for the museum in our holiday cottage that I realised it was not lost to the horror of shopping village hell, the mill that was built in 1783 was still functioning! Even better, dogs were allowed so off we went to visit.

The museum is in the main part of the mill, with the layout left much as it originally was, meaning that if you follow the leaflet and online guides you really can learn a lot about cotton fabric and yarn production. There is a huge collection of textile machinery in the museum – some original to Masson Mills, alongside a large number from other mills in the UK and there are two daily machine demonstrations. Not all of the machines are currently in working condition, but it’s an ongoing project to get as many as possible restored and up and running.

The tour starts in the “Doubling Room” where the cotton yarns were prepared for weaving by being spun and several strands doubled (hence the name) to increase their strength and prepare them ready for weaving. 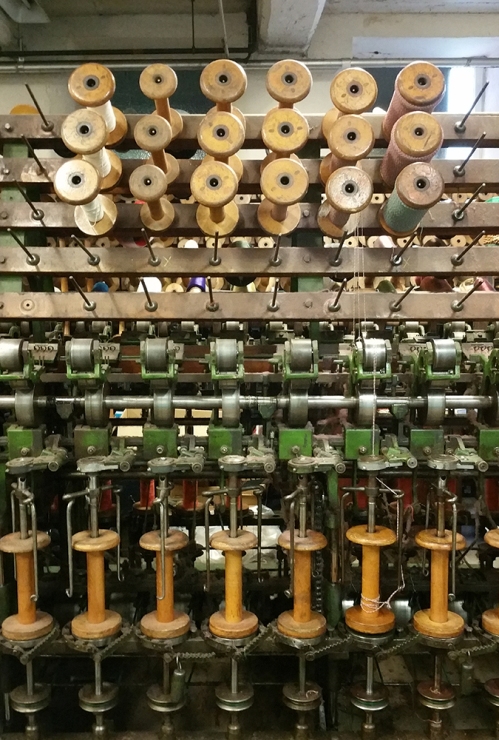 Doubling room and machines at Masson.

Here is a doubling machine in action at Masson:

The main part of the tour and the machinery demonstrations are in the noisy “Weaving Shed”. Before weaving can start, the warp threads (that run along the length of the cloth) have to be measured out on the warping mill:

and the weft threads (that run from side to side across the width of the cloth) have to be wound onto pirns: 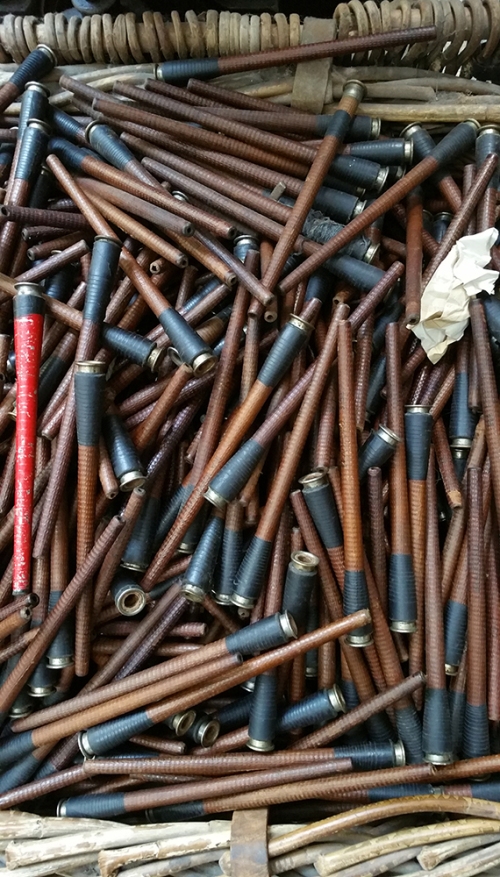 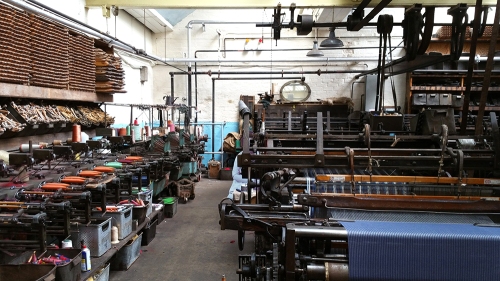 before being loaded into shuttles: 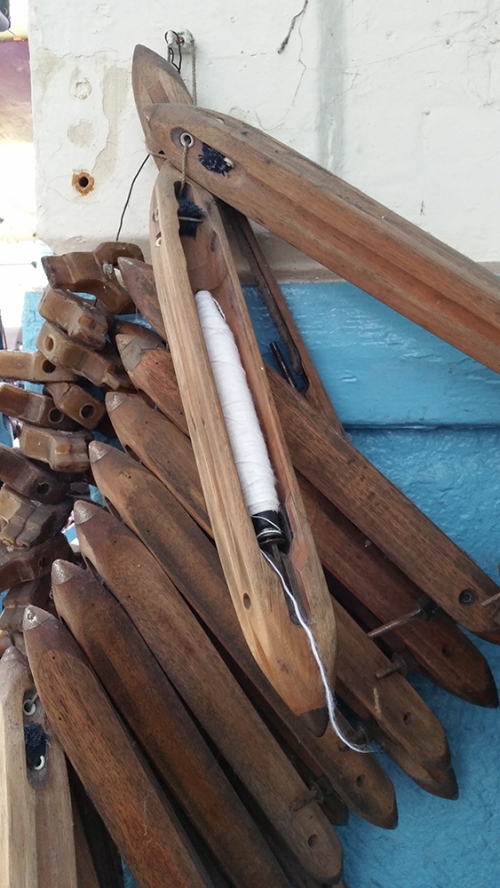 Masson has a selection of working looms that are set to work for the machinery demonstration. They’re never all run at the same time, as even in 5 minutes the noise of just half a dozen looms is deafening, yet at its height Masson Mills would have had 1000 looms running concurrently around the clock, not to mention all the other machinery.

These are Yorkshire Looms:

Here they are in action:

These are Lancashire looms:

Each type can hold up to 1200 warp threads (known as “ends”) and would take a week to set up. The metal tipped shuttles loaded up with the weft threads running back and forth across the loom (known as the “shed”) travelled at speeds of up to 60 mph.

As a maker I’ve long felt nostalgic about old mills and for sure there was a certain sense of community and purpose around some of these places; generations of families finding employment and some benevolent factory owners providing good quality housing and recreational activities for their workers. Of course there was also a harsh reality to working in cotton mills; at every turn you can see the hazards, from the belts running the machinery that could snap, the metal tipped shuttles travelling at high speeds, not to mention the inevitable deafness from continuous machinery noise. Workers also couldn’t help but breathe in the fine cotton fibres during their long days at work, which caused a deadly lung disease (called byssinosis). Even the seemingly innocuously named “kissing shuttles” (an older type of shuttle which required workers to suck the yarn through a small hole to thread it) enabled the spread of tuberculosis in factories.

In contrast here are some modern air jet looms in action in overseas factories:

And here is a factory full of modern looms:

I’m not sure if it’s any more appealing as a workplace than the Victorian weaving shed!

Back at Masson in the Spinning & Carding room are some of the most dangerous pieces of equipment, the bale breaker (nicknamed “The Devil”) used spikes to break open the bales of raw cotton at the start of the whole process and at Masson there were reports of gruesome and fatal accidents involving this machine.

Also, let’s not forget that at this time children as young as 8 worked in cotton mills, they were small and nimble and often used to clean the machines as they worked with lots of moving parts, like this spinning mule. 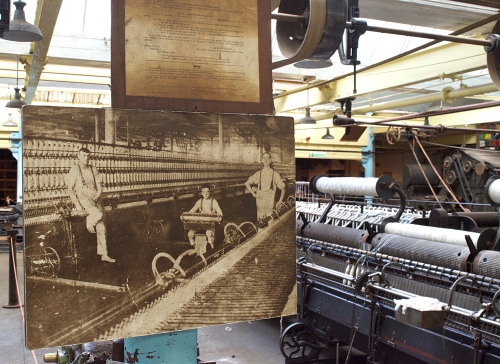 It’s a contentious issue, as the alternatives to working in the cotton mill would often be working in lead mines or no work at all, long before any kind of social security system existed to help families in trouble. It could be argued that “at least” Richard Arkwright who owned the mill provided his workers with good housing, allotments, free medical care and sick pay. However, it’s also worth pointing out that Arkwright built himself a grand castle Willersley Castle (now a hotel) on a hill overlooking the Derwent Valley (although he died before he got chance to live in it).

Masson Mills only stopped working in 1991, it had been producing cotton yarn for Tootal Group but after Tootal was taken over by Coats Viyella in 1991 production was stopped. Until then it had been the oldest working mill in the world. Today the museum and shopping village are still powered by the river Derwent that drives hydroelectric turbines supplying power to the whole site; a green and renewable source of energy which now helps to protect the beautiful surrounding area along the Derwent valley.

The museum generates some additional income from selling the fabric woven on the working looms and selling some of the old tools and materials – I bought some warp bobbins, one full of string made at the mill. 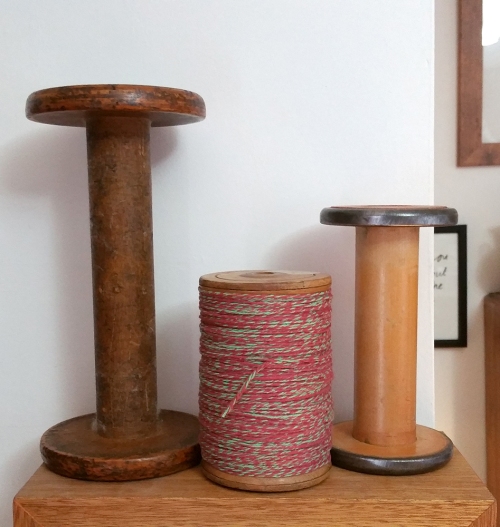 I didn’t buy any of the fabric as it was quite coarse – more the kind of thing you’d use for bags or home furnishings. Of course, now I wish I had done though. I can imagine many makers out there would love to use it and it was only £4pm!!

If you’re in the area, Masson Mills (and the other sites along the Derwent Valley) are well worth a visit. I’d recommend going with either a fellow textile enthusiast, or someone who is interested in machinery and how things work!

4 responses to “A Visit to Masson Mills Working Museum”