It’s my turn today in Portia’s August spectacular blog series “The Refashioners”. This year the theme is “Jeanius” and I’m not going to give the whole game away here, so hop over to Portia’s blog http://www.makery.uk to see the whole shebang.

However, what I did end up doing with my project was, without even planning to, write a detailed step-by-step tutorial for how to achieve my favourite edge finish on a V-neck. So I’m going to just share that bit as a mini self-contained tutorial. Here goes: 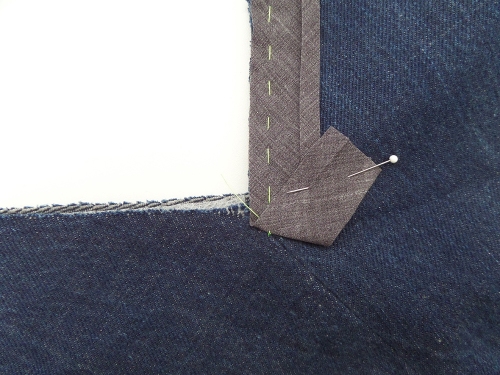 3.  Your tacking should stop in exactly the same position at the point of the V as it started on the other end of the binding. Machine in place. 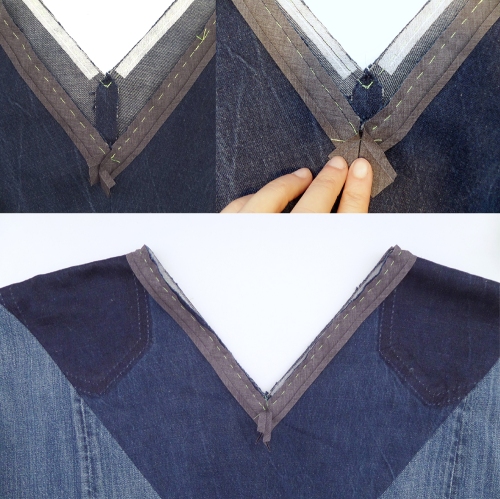 4.  Snip into the seam allowance of the garment as close as you dare to the point of the V.

5.  Let the bias binding fold back on itself to cover your stitching and then fold it around completely to the inside of the neck.

6.  The two ends of the bias binding will overlap each other.

7.  Wrap one end of the binding around the other.

8.  Cut off the longer end of the bias binding that isn’t tucked under and pin and tack the whole of the binding in position close to the loose edge.

9. Machine the binding in place from the right side of the garment following your tacking.

NOTE: some people like to understitch the first line of machining (after step 4). It can help to keep the binding on the wrong side of the garment. I don’t always understitch, only if I’m working with particularly bouncy fabric.

Ta-dah here’s how it turned out on my Refashioners project:

If you fancy having a go at making your own bias binding, you can find my tutorial for making continuous strip bias binding here, it’s quick and a really thrifty way to use up leftover fabrics – a 47cm square can make 7.5m of bias binding!!

Posted in Everything Else, Sewing Help

When Portia who hosts the fabulous Makery blog asked if I’d be up for her having a go at a hack idea she had in mind for the Brightside Shrug I jumped at the chance. Portia and I seem to have very similar tastes (always a pleasure to find an kindred aesthetic spirit) and I was really intrigued to see what she would come up with. I’m not precious about people altering my patterns, in fact I love to see the clever and creative ways my patterns are interpreted by different makers. So, over to Portia….

I have an irresistible urge when I see a pattern, to mess with it. For some reason when I look at a sewing pattern I start imagining variations of it. A tweak here. A tweak there. And you can change the look and feel of a pattern. Basically pattern hackery is fun and what’s more, using an existing pattern as a jumping off point means the hard work of drafting is basically done for you. Playing with a pattern to create different variations can give you more bang for your buck when you buy a pattern too; and who doesn’t love that?! 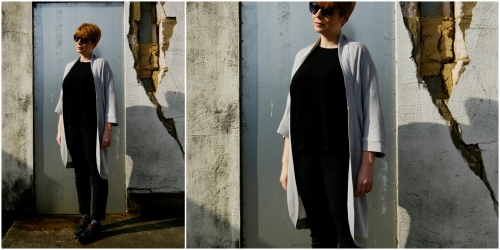 What I’ve often wondered though is whether designers mind when you mess with their patterns? After all, they’ve spent all that time and skill creating a pattern and along you come and start changing it! I mean, isn’t it a bit like having someone cook you a gourmet meal, then covering it in salt or pepper before you’ve even tasted it? (For the record….I absolutely do not do that!) Well I needn’t have worried. Methinks Wendy is a passionate explorer of ideas because when I tentatively mentioned to her that I’d been pondering a “longline” hack on her MIY Brightside Shrug, I could almost hear her clapping her hands together with delight. And when she asked if I could turn it into a guest post for her blog, well, honoured, right?

So here is the starting point. Beautifully modelled by Wendy. It really is a great little pattern. Especially for beginners. I especially think it’s a great project to cut your teeth on a serger with. I really do love the style of this. So neat and compact and perfect to throw over a tee. But the beauty of being able to sew your own clothes is adapting them to suit you. Now I’m a bit self-conscious when it comes to my waistline. So it’s a matter of feeling comfy to me to have my midriff covered; and I generally prefer my cardigans to be at the hip or lower. 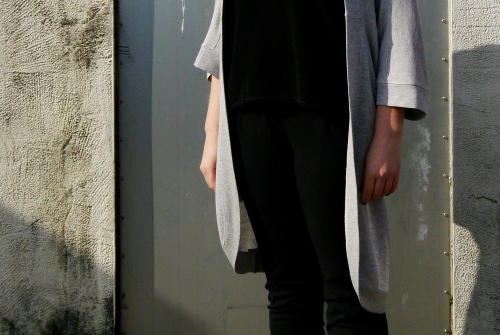 Much lower in this case, because I hacked it so it was knee length!

It’s a very simple hack. I tested the idea out in miniature first. When you buy the pattern in pdf there’s a layplan for the pdf tiles and I simply cut the whole pattern piece from that and messed around with it on paper first. I even cut a miniature in fabric and sewed it up but forgot to take a pic of that! You can see the basic idea here. I’ve extended the bottom section of the pattern to make it longer following and extending the angle of the side seam…

Here it is drawn directly onto fabric…

Construction is exactly the same as the pattern. Except of course, when you’ve finished sewing the underarm/side seam sections, you’ll have the extended bottom section, well, extending. Which actually looks a bit weird as you sew because essentially it’s at right angles to the top section. But thanks to the nature of knit fabric (this is French Terry from Girl Charlee) as soon as you put it on it will automatically stretch out a little and drop down and hang vertically 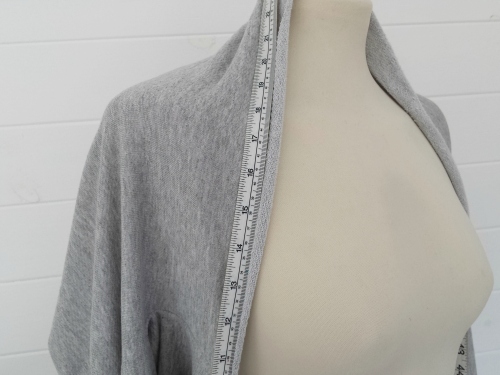 Now of course changing the length of the back section means the existing pattern piece for the band that goes around the entire shrug, is basically redundant. It’ll be too short. Simply measure the new circumference of the shrug opening and cut a longer band to fit. (Same length as the circumference plus a little SA)

Apply the band as per the pattern instructions. Pressing the seam allowance to the inside and top stitching down. When you reach the section at the side seam where the back is longer than the front, simply ease/gently stretch the seam so it’s straight. Much in the way you would treat a curved seam on a serger.

Ok, ignore the fact that I had to piece my neck/hem band together because I accidentally cut through my only continuous strip of fabric. Don’t judge. We’ve all been there 😉 In any case, when you look at the underarm/side seam you can see that the bottom section (the one that I extended and was essentially at a right angle) now hangs more or less vertically with a light curve. That my friends is the magic of sewing with knits. They will forgive you pretty much anything. Including turning a 90 degree angle into a 180 degree angle!

Massive thank you to Portia for a brilliant post. I love this version of the Brightside shrug and would never have imagined that this was what she would come up with. And that little tip of trying out pattern adaptations on the miniature pattern pieces – stroke of genius Portia!! I obviously will have to be trying one of these versions for myself now too. What do you think? Inspired to have a go?

You can get your copy of the pattern in printed paper form here or as a pdf download here and to encourage you to get hacking your own version, enter the code “makerybrightsidehack” when you checkout to get 15% off your order until Tuesday 29th March.

I love men’s traditional formal dress shirts those with the bib fronts, I think that bib section is crying out for a bit of textilian magic and have had ideas buzzing around for a long time, so what more perfect excuse than the Refashioners?!

I was so happy when super creative refashioner extraordinaire Portia asked me to take part in her project and this one is up on her blog today.

I used one of the patterns from my book “The Beginner’s Guide to Dressmaking” as a starting point, read all about how I did it.

Posted in Other Work, Sustainable Sewing

My last series for Sewing World magazine was all about refashioning, so it was fitting when my Instagram buddy Portia Laurie asked me to be a part of her bi-annual project the Refashioners. I must admit to being just a tad flattered when Portia asked me, you’ll see why when you see who all the other participants are (I think it’s safe to say I’m in pretty good company there)!

You can find out more about the history of the project on Portia’s blog here. This year it’s all about shirts and we have all been challenged to make something new out of a shirt or shirts and write a blog post about how we did it. This will result in a post from one of the participants every weekday for the whole of August (you can also follow the progress on social media by using #getshirty).

Here’s a sneaky peep at one of my transformations from Instagram:

The first of my transformations is going to be on Portia’s blog on Friday 14th August. I’m sort of excited and nervous at the same time!

In addition to keeping you busy reading about the amazing transformations by the participants, you can get involved this year too. Portia has organised an amazing prize package for one lucky winner.

So, are you going to join us? I look forward to seeing what you come up with…

Posted in Other Work